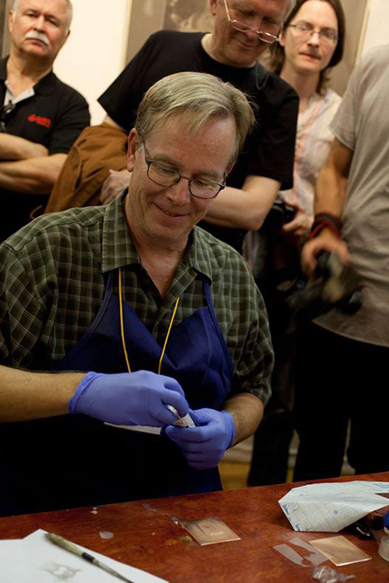 Werger inking a plate
Recently retired, Art Werger was a Professor of Art in the Printmaking program at Ohio University where he was named a Presidential Research Scholar. He also taught at Wesleyan College in Macon, Georgia, where he served as Division Chair of the Fine Arts.

Werger recieved his BFA from Rhode Island School of Design in printmaking in 1978 and his MFA from the University of Wisconsin in 1982. As a master printmaker, he works with aquatint, etching and mezzotint, with some of his images printed in multi-plate colors.

In addition to etchings, aquatints and mezzotints displayed throughout this site, Werger's work is available in galleries throughout the United States and online.

Art Werger has received over 250 awards in national and international exhibitions including:

Art Werger grew up in the suburbs of New York where he developed a passion for drawing at an early age. After studying illustration and painting at the Rhode Island School of Design, he switched into the field of printmaking.

Over the last thirty years, he has focused on etching, aquatint and mezzotint and has become an internationally renowned artist in those media having received over 250 awards in national and international exhibitions.

In 2012 he received the Award of the Rector at the International Print Triennial in Krakow, Poland and the Prize for Full Correspondence between technique and Imagery at the First International Mezzotint Festival in Ekaterinburg, Russia.

Werger has works in the collection of the Guanlan Printmaking Base in China, The National Gallery of Art in Washington, D.C., the Boston Public Library, the Brooklyn Museum, the Philadelphia Museum of Art, the Museum of Fine Arts in Boston, the Trenton Museum in New Jersey and over three hundred corporate and private collections.

"My recent work continues to explore themes of time/space and the nature of representation as shared experience. Through the media of etching and mezzotint, these pieces attempt to place the viewer into an active relationship with the subject through various forms of narrative engagement. My subjects are drawn in a realistic manner but are often observed from an unusual angle. I present imagery from an aerial vantage point, or overlapping other layers of reality, taking on the role of the omniscient narrator in a work of fiction.

From the elevated position, the environment lays out flat in front of the viewer. The viewer is privy to the world below, yet curiously removed from it. As a cinematic device, this abstract angle allows for an overview of the scene as well as an introduction to the characters within the environment.

In the double exposure images, I am attempting to create an image which requires some sorting out in order to be understood. In my personal history, I have found that the random juxtaposition of remembered events creates a resonant emotional trigger. I hope to implant the seed for this type of a psychological reaction in the viewer’s mind.

This is intended to suggest a narrative which ultimately requires the viewers' participation."

To learn more about the artist, download his:
Resume
Curriculum Vitae (CV)